Think of the rewards of cultivating the tastes of summer and DIY microgreen all through the winter. You can do this.

Since Kate Spring and her husband, Edge Fuentes, founded Good Heart Farmstead in Vermont in 2013, she has cultivated not just mesclun, strawberries and tomatoes, but also the abundance of the patience required of a farmer. Plant parenthood reminds us: Living things take time. And sometimes they have minds of their own.

Lately, as mother to Waylon, a 7-year-old son she calls “our best crop ever,” Ms. Spring is occasionally asked to dig down even deeper, in a growing test of wills as she did after three long days of carrot harvest. “There are those moments, like when all those root vegetables need to be washed,” she said, “and your child commandeers the hose and washes you instead.”

But there is one crop, whose time is now, that promises near-instant gratification, requiring little patience and exhibiting blessedly minimal rebellion.

Microgreens fully developed seed leaves or cotyledons plus a true leaf or two, bigger than sprouts but smaller than baby greens can be grown indoors in a small space, making them the ideal off-season do-it-yourself project for those who miss the vegetable garden and its in-season flavors. By investing a couple of weeks in each tray of tiny, leafy greens, root vegetables or herbs, you can enliven winter with concentrated bursts of nutrition and taste.

Microgreens are a cusp-season crop at Good Heart Farmstead, an L3C, or low-profit limited-liability corporation, which means it’s “a mix between a nonprofit and for-profit business a for-profit but with a social mission in the forefront,” Ms. Spring said. “We work on increasing food access for low-income Vermonters,” often in collaboration with the Northeast Organic Farming Association of Vermont.

The Year-round Secret To Growing Microgreens 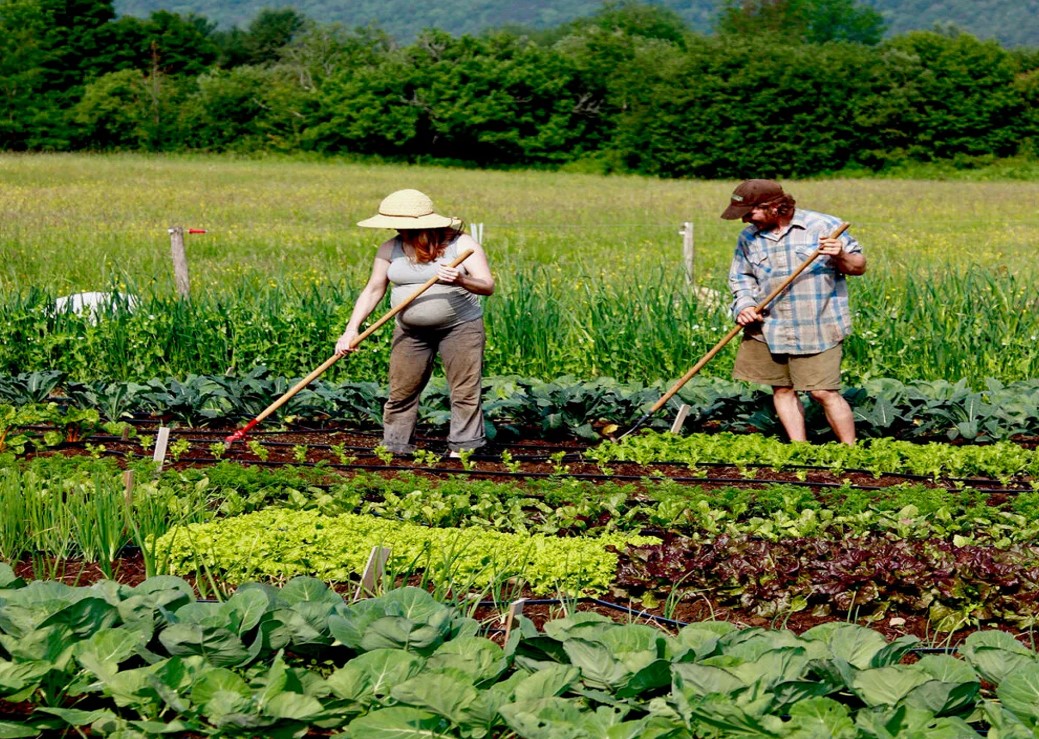 The small, certified-organic operation in Worcester (Zone 4a) focuses on farm shares, or CSA subscriptions, serving up to 100 subscribers in the summer season, one of four subscription periods each year.

As the last outdoor fall greens fade, Ms. Spring and Mr. Fuentes sow microgreens in greenhouse flats to add “a nice, fresh green item in the share,” she said, that is otherwise transitioning to roots and other winter storage vegetables.

So order some seed, clear a space on the kitchen counter and call the seed-starting light into service. It’s microgreen season.

Besides the sheer awe inherent in any version of seed-starting, there are other motivating factors. Price, for instance.

Microgreens are what farmers refer to as a high-value crop. In plastic grocery-store clamshell boxes they may run $2 to $3 an ounce ($32 to $48 a pound) “a really premium product,” Ms. Spring said. 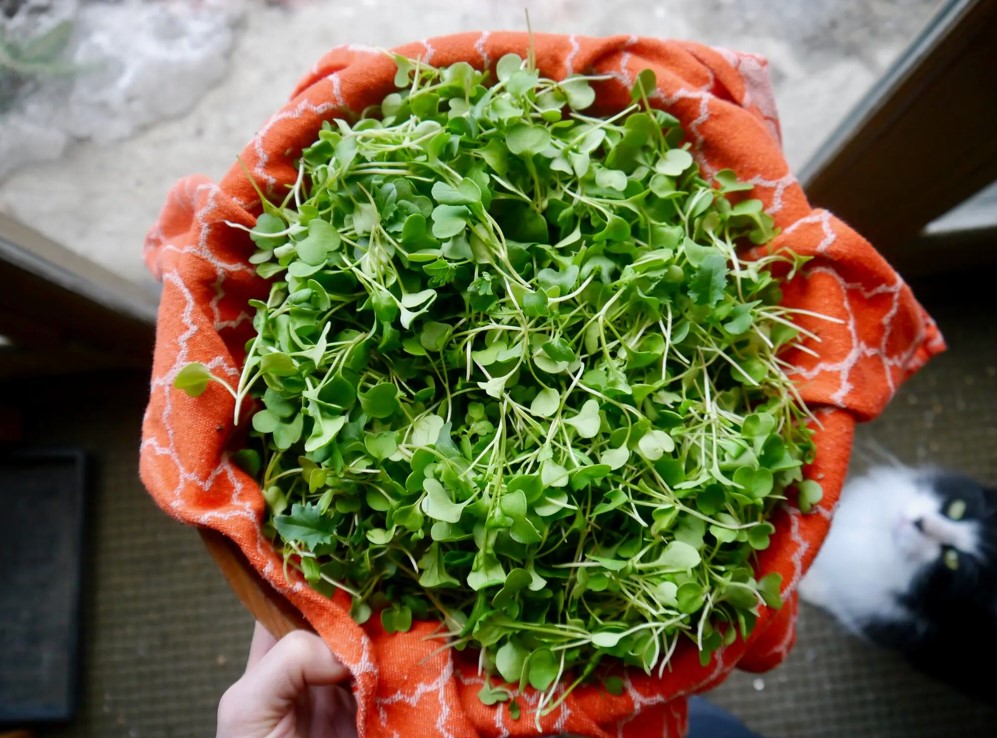 Microgreens are also nutrient-dense. Researchers with the University of Maryland College of Agriculture and Natural Resources and the United States Department of Agriculture evaluated vitamin and carotenoid concentrations in a range of varieties in a 2012 paper. The findings, in brief: Microgreens contained up to 40 times the nutrients of the plants’ mature leaves.

And oh, the flavor. Yes, they brighten up salads and sandwiches, but cilantro microgreens on top of black bean and sweet potato tacos, anyone? They’re highly recommended by the Spring-Fuentes household, where there are always basil microgreens as well, for punching up the summery quotient of red sauce frozen at peak tomato harvest.

“Arugula or basil or kale microgreens are also really good on eggs in the morning,” said Ms. Spring, who tends to use them “as an additive, not the main ingredient.”

Start With These Varieties

The diversity of organic microgreen seed offerings in catalogs like Johnny’s Selected Seeds and High Mowing Organic Seeds can be intimidating. Start with something in the mustard family (Brassicaceae) that promises a quick payoff, Ms. Spring suggested, like radish, arugula or mizuna (a mild-flavored mustard).

“Our favorites are basil, cilantro, Red Russian kale and the arugula and mizuna,” Ms. Spring said.

Broccoli and chard are popular, too. Catalogs also offer mixes like a spicy one of various mustards, selected to germinate and mature on a similar timeline.

Yes, you can upcycle a cardboard egg carton or plastic sushi container into seed-sowing service, and maybe that’s a good place to begin. But once you’re hooked, a couple of standard nursery flats with drainage holes, called 1020 flats, with trays that fit beneath, will optimize the process. (In the meantime, a plastic boot tray or a rimmed baking sheet could be called into action under ad hoc seedling trays.)

There is no one-size-fits-all growing method. “It takes some guesswork and practice, so go into it with a trial mind,” Ms. Spring said.

Experimenting with varieties, sowing density and harvest timing an extra day or two, a half-inch taller than the last batch? will reveal what works for you.

Using more than one flat and tray will mean fewer gaps in your supply. You could try sowing a succession crop when the current one is within a few days of harvest, or sowing slower and faster growing varieties at the same time.

The key is taking notes and researching the catalog websites, where the “number of days to first true leaf” will indicate how fast one variety will grow relative to another. That is especially important if you want to grow partial flats of two things. A good match for a uniform harvest pairs crops with similar days to maturity like broccoli and Red Russian kale (both 10 to 15 days to true leaf) or basil and cilantro (16 to 25 days).

Start with the right location: 65 to 70 degrees, not adjacent to a heater or a drafty window. Moisten a supply of potting soil, either in its plastic bag or in a waterproof tub, by adding a small amount of water and mixing it with your hands or a trowel. Squeeze a fistful; it should be moist enough to hold its shape, but not so wet that water drips out.

Then line your tray with an inch or so of soil, tamped down so it’s compact, with an even surface. This will help ensure that seeds have equal soil contact for even germination.

To sow the seeds, scatter them thickly, according to the packet directions, aiming for 10 to 12 seeds per square inch for small seeds like basil, mizuna or kale and six to eight seeds for larger ones like beets or chard. Gently press them into the soil.

Lightly water the seeds with a mister or spray bottle. 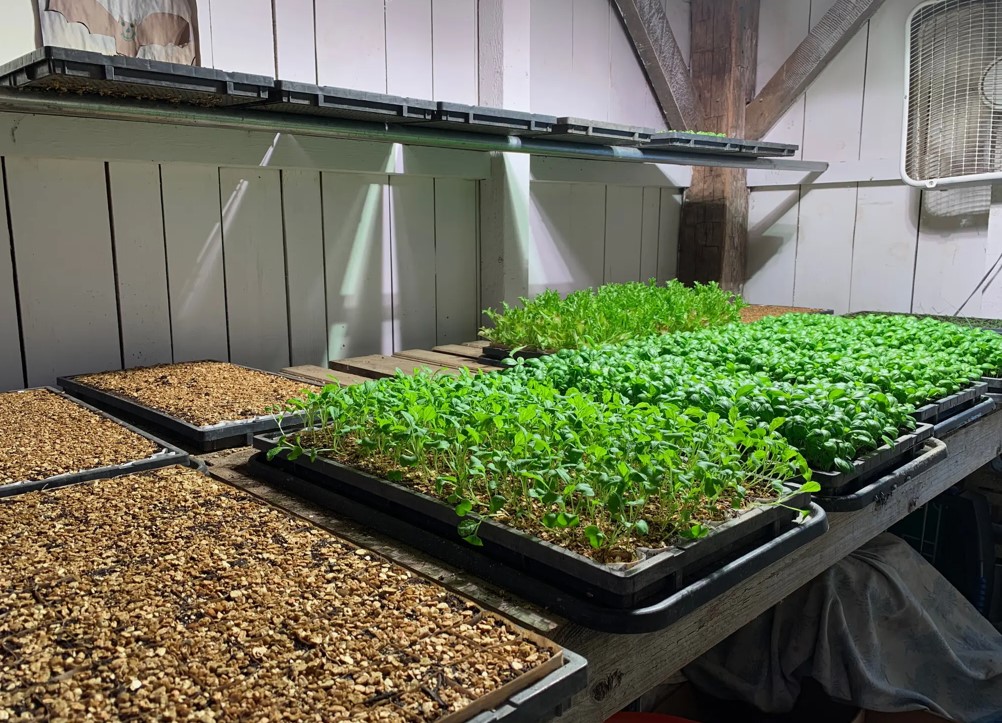 Cover the tray with a germination dome or a damp paper towel. (If you use a paper towel, mist it daily so it stays moist during germination.) No supplemental light is needed yet.

As soon as the seeds germinate, usually in about three to five days, remove the dome or towel and place the uncovered tray under grow lights for 16 hours a day.

Water as needed to keep the soil moist but not waterlogged. Microgreens flatten easily, so use a mist or spray, or switch to bottom watering, adding a quarter of an inch of water to the tray below; the flat’s drainage holes will allow the soil to wick up water. For even watering, trays must be on a level surface.

Airflow is important, or thickly sown microgreens can suffer from a fungal disease called damping off. A fan set on low nearby helps.

Microgreens are harvested around the time the first true leaf appears the one that resembles an older version of the plant, often between an inch or two tall. Use sharp scissors or a harvest knife (Johnny’s and High Moving both sell Victorinox serrated knives). Eat immediately or refrigerate in a closed plastic bag or container for two to three days.

Useful Article: Reasons Why You Should Grow Microgreens In Your Home