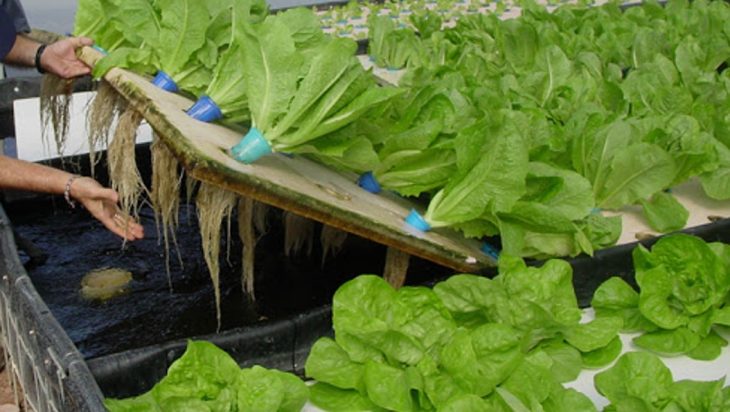 When it comes to growing plants, aquaponics is one of the most sustainable food production systems around. Aquaponics is a combination of aquaculture (raising aquatic animals) and hydroponics (using nutrients and water rather than soil to cultivate plants). It typically requires less water, less energy, and less labor than traditional farming.

What Is an Aquaponics System?

An aquaponic system uses the nutrient-rich water from fish tanks as a natural fertilizer for plants. The plants, in turn, help purify the water for the fish habitat, mimicking nature’s ecological process found in lakes, rivers, and other waterways.

Both the water and nutrients in an aquaponic system are recycled in a closed-loop manner, oftentimes while being more productive than conventional soil farming.

Warm freshwater fish are known to benefit leafy crops the best, while other plants adapt better depending on the size or type of aquaponic system and the amount of sunlight available. Many aquaponic growers use freshwater tilapia fish in their tanks, although catfish, trout, bass, crustaceans like crayfish, and even saltwater fish can be used.

Both the fish and plants you choose for your aquaponic system should have similar temperature and pH needs, and while most commercial growers tend to lean toward leafy crops like lettuce and herbs, it is also possible to grow more exotic fruits and veggies like bananas and pomegranates.

Whether you’re growing on a large scale or just starting a new hobby at home, here are 15 of the best plants for aquaponics.

Leafy lettuce is probably the most commonly grown aquaponic plant, mainly because it is also the simplest and the most productive. The nutrient demand is low, while the pH requirement is between 6.0 and 6.2, and the temperature should be between 60 F and 70 F.

Lettuce also has a shorter growing cycle and loves the sunlight, so it is ideal for outdoor aquaponic growing systems. Maintenance is typically limited to checking the pH level once a week, and you can harvest your lettuce in as little as a month’s time.

Kale plants grow so well in aquaponic systems that they can easily get out of hand if not harvested regularly. Also, kale can handle a slightly higher pH and temperature limit with a lower nutrient requirement than lettuce, and can be planted directly in sunlight outdoors as long as the temperature stays within 55 F to 70 F (it prefers temperatures on the cooler side, however).

The plants do well in most aquaponic systems, but are partial to gravel growing media. After about five to six weeks, aquaponic kale is ready to eat.

Low nutrient requirements and a wider margin for error in terms of pH make spinach another amazing leafy green to plant in an aquaponic garden. The green superfood plant likes temperatures between 45 F to 75 F, but too much sun outdoors can cause bolting and a subsequent bitter taste in the crop. Since it has shorter roots, spinach doesn’t need a deep growing bed in order to thrive, making it ideal for nutrient film technique aquaponics and raft systems.

Although tomatoes require a higher amount of nutrients, they can handle warmer temperatures (up to 85 F) and grow wonderfully in water. Because they are high nutrient plants, tomatoes are best reserved for larger systems with more time to establish themselves. Just like tomatoes grown in traditional gardens, aquaponic tomatoes will likely need a support structure to handle their tall growth—up to 6 feet for some plants. The best options for these plants are fish that like warmer water, such as tilapia, koi, and goldfish.

Usually, the biggest problem with aquaponic watercress is how fast it grows and multiplies. One small plant quickly turns into many more and before you know it, you have way more watercress than you need. Plus, if it isn’t harvested regularly enough it can easily clog your grow bed, creating issues for the rest of your system. Watercress can even be cultivated circularly, as it is easy to grow from cuttings and from seeds, meaning you can produce it continually and for little to no additional cost.

From white daikon to classic red, radishes are one of the easiest vegetables to grow via aquaponics. Those who grow them regularly swear by using wood fibers to help sprout the seeds, but clay and pumice are also good growing mediums for radishes. They prefer cooler temperatures as low as 60 F but up to 80 F, and pH levels between 6.0 to 7.0, so common tilapia and koi are often used.

Carrots need a lot of sunlight to thrive, though they prefer cooler temperatures between 59 F and 65 F. These veggies are considered difficult to grow, all it takes is a correctly set up aquaponics system with a fine, pH neutral growing medium and at least 6-8 hours of direct sunlight daily. A media bed aquaponics system is best for carrots, as they do not do well in other methods, and they can be harvested from seeds in two to three month’s time.

Strawberries are best grown using a vertical aquaponics system since they multiply quickly and require very little space. The only catch is since most aquaponic strawberry plants only produce a few individual fruits, it is wise to plant as many as possible and give them plenty of space if you want to create a large yield. They require medium to high amounts of nutrients and prefer a pH between 5.5 and 6.5, with a temperature between 60 F to 80 F. Unlike leafy greens, strawberries require more potassium, so most growers will add them into their aquaponic systems after they’ve already become more established.

This herb’s natural ability to tolerate high heat and moisture makes it one of the best plants to include in an aquaponic system. It grows fast and can germinate in under a week, with plants ready to harvest and eat within just 25 days. Basil has low nutrient requirements and a temperature preference between 65 F and 85 F. Just like traditional soil-growing basil, it’s important to remove flowers as they form in order to increase yield, and be sure to harvest it sparingly to lengthen its life.

No matter which variety of mint you choose to grow, they are almost sure to flourish in an aquaponics system. This isn’t always a good thing, as mint grows so fast that it runs the risk of overwhelming the entire growing system and keeping the rest of the plants from growing.

If you do choose to plant mint, keep plants 18 to 24 inches apart so the roots don’t compete over precious water and nutrients. Mint also requires partial shading, temperatures from 65 F to 70 F, and pH between 6.5 and 7.0.

As lovers of warm weather, cucumbers grow best in an area with plenty of access to sunlight and humidity (artificial lights if growing indoors). Keep a close eye on their complex roots to ensure they don’t clog up the piping within the aquaponic system, and keep plants between 11 and 23 inches apart so they don’t hoard nitrogen from the rest of your plants.

Thanks to cauliflower’s natural hardiness, it requires little maintenance and will thrive in a water-based aquaponics system. Since it is also extremely resistant to pests and disease, it is another one of the best aquaponic veggies for beginners. Keep your cauliflower out of direct sunlight, and especially frost, if growing outside; it can also thrive in a greenhouse.

Another easy plant to grow in aquaponics, cabbage does best with a pH of 6.2 to 6.6 and in temperatures between 45 F and 75 F. Cabbage seedlings should be kept warmer than a crop that has already matured, but otherwise, these vegetables require little maintenance outside of watching for the regular pests and rot. Harvest aquaponic cabbage after nine weeks. Since they are rather nutrient hungry, you’ll want to monitor them for nitrate levels, and consider a nutrient film technique system because of their shallow roots.

Aquaponics isn’t just for fruits and vegetables, but for flowers and ornamental plants as well. Under the right conditions, sunflowers can go from seed to 4 or 5 feet tall with an aquaponic system, and will do well in both a greenhouse and outdoors in a warm climate. They can be grown without the use of chemical fertilizers or pesticides and are both edible and aesthetically pleasing.

Opt for pH-neutral growing media like shale or clay pebbles to support your aquaponic pepper plants from seed to maturity, and remember that they grow best with their roots in water that is between 60 F and 75 F. However, hot peppers like cayenne or habanero will likely be more tolerant to warmer temperatures. They also prefer moderately acidic levels between 5.5 and 6.5, so they work with multiple fish options (even smaller fish like tetras thrive alongside pepper plants).

Useful Article: His Contributions To Aquaponics Are Legendary