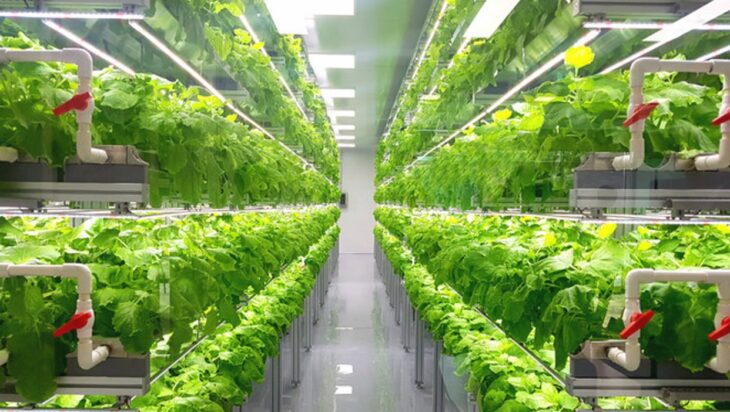 MAKKAH: Agriculture is the world’s oldest, most adaptable industry and some of the earliest cultivation techniques are still in widespread use. But as nations address future challenges, authorities are looking to more modern concepts and ideas to ensure their citizens are fed.

Saudi Arabia, for example, is exploring the use of vertical farming as one of the innovative solutions to ensure enough crops are grown to keep pace with increasing demand. The Ministry of Environment, Water and Agriculture has allocated SR100 million ($27 million) to develop and localize vertical-farming technologies.

As the name suggests, vertical farming is an agricultural process in which crops are grown in vertically stacked layers rather than spread out horizontally in traditional rows in fields. This approach requires much less space and results in higher crop yields per square foot of land used.

Vertical farms are mainly situated indoors, in structures such as warehouses, where the environmental conditions needed for plants to grow to their full potential can be carefully controlled.

In Saudi Arabia, the National Research and Development Center for Sustainable Agriculture (Estidamah) plans to form global partnerships with pioneers in this field and introduce vertical farming facilities to localize this modern agricultural technique.

Abdulrahman Abdullah Al-Soqeer, a faculty member at Qasim University and a member of the board of directors of Estidamah, told Arab News:

“In addition to being a source of fresh crops for urban residents in particular, vertical farming is believed to be a promising means of providing crops to keep pace with the steady increase in the population of the Earth, which is expected to exceed 9 billion people by 2050”.

“The importance of vertical farming lies in the small space it requires, especially in large cities that are witnessing large waves of migration; two out of every three people are expected to be living in urban areas during the coming decades.

“A key advantage of vertical farming is the provision of a variety of agricultural products, particularly leafy vegetables, and strawberries, in small areas and with less water and in an environmentally friendly manner. Some crops can be produced in locations close to consumers, reducing the need to transport products through traditional means that increase pollutants in cities.

In addition to being a source of fresh crops for urban residents in particular, vertical farming is believed to be a promising means of providing crops to keep pace with the steady increase in the population of the Earth, which is expected to exceed nine billion people by 2050

Abdulrahman Abdullah Al-Soqeer, Faculty member at Qasim University and a member of the board of directors of Estidamah

“The global market for vertical farming is rapidly growing, especially in some developed countries with high population densities.”

Faleh Al-Juhani, an expert in vertical farming, told Arab News: “The goal of vertical farming is to obtain as much food as possible and expand the variety of crops by creating exceptional climatic conditions through which we can raise production rates per square meter, so long as the appropriate conditions are available in terms of lighting, sustainability and growth, and design.”

He explained that vertical farming takes place in a tall building. A combination of artificial and natural light is used to obtain the necessary levels of photosynthesis, he added, and aerobic or hydroponic methods and organic matter from some plants are used to grow the crops.

This modern agricultural technique, in which crops grow indoors in vertically stacked layers, could prove vital in efforts to feed growing urban populations.

Vertical farming helps achieve sustainability, Al-Juhani said, by reducing some of the costs involved in traditional agriculture, and saving more than 90 percent of the water used.

He echoed Al-Soqeer’s observations about the expected growth in urban populations. With about 80 percent of the world’s population expected live in urban areas by 2050, Al-Juhani said demand for food in these locations will rise and the effective use of vertical farming will be an important tool for addressing this challenge.

It allows the production of abundant crops all year long, which is particularly significant, he added, because in Saudi Arabia, in common with other countries, many traditionally grown crops are adversely affected by cold weather, causing supply shortages that can lead to price increases that can be difficult to control.

Al-Juhani said that in addition to specialist facilities, vertical farming could be adopted in homes, on rooftops and on balconies.

“It is an easy and enjoyable method, despite our deep belief that nothing can match the efficiency and quality of the soil,” he said. “This is why many countries of the world have resorted to radical and pivotal solutions and succeeded in this regard.”