Home Featured What Are GMOs And GM Foods? DNA From Another Organism

What Are GMOs And GM Foods? DNA From Another Organism

A genetically modified organism, or GMO, is an organism that has had its DNA altered or modified in some way through genetic engineering. For thousands of years, humans have used breeding methods to modify organisms. Corn, cattle, and even dogs have been selectively bred over generations to have certain desired traits. Within the last few decades, however, modern advances in biotechnology have allowed scientists to directly modify the DNA of microorganisms, crops, and animals.

Genetically modified organism (GMO), organism whose genome has been engineered in the laboratory in order to favour the expression of desired physiological traits or the generation of desired biological products. In conventional livestock production, crop farming, and even pet breeding, it has long been the practice to breed select individuals of a species in order to produce offspring that have desirable traits.

Genetically modified organisms (GMOs) are produced using scientific methods that include recombinant DNA technology and reproductive cloning. In reproductive cloning, a nucleus is extracted from a cell of the individual to be cloned and is inserted into the enucleated cytoplasm of a host egg (an enucleated egg is an egg cell that has had its own nucleus removed).

The process results in the generation of an offspring that is genetically identical to the donor individual. The first animal produced by means of this cloning technique with a nucleus from an adult donor cell (as opposed to a donor embryo) was a sheep named Dolly, born in 1996. Since then a number of other animals, including pigs, horses, and dogs, have been generated by reproductive cloning technology. 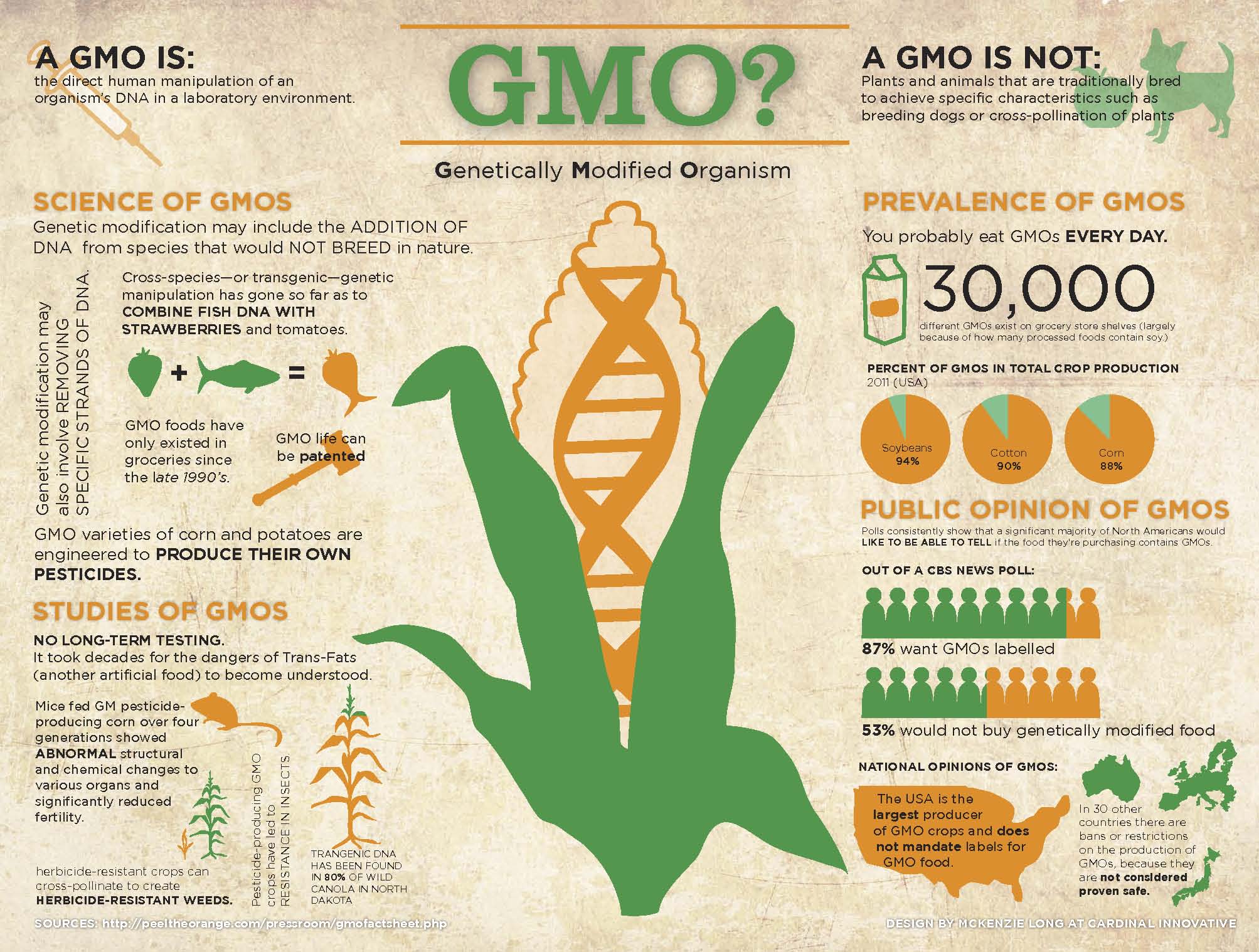 Recombinant DNA technology, on the other hand, involves the insertion of one or more individual genes from an organism of one species into the DNA (deoxyribonucleic acid) of another. Whole-genome replacement, involving the transplantation of one bacterial genome into the “cell body,” or cytoplasm, of another microorganism, has been reported, although this technology is still limited to basic scientific applications.

In genetic modification, technologies are employed to produce organisms whose genomes have been precisely altered at the molecular level, usually by the inclusion of genes from unrelated species of organisms that code for traits that would not be obtained easily through conventional selective breeding.

In most cases, GMOs have been altered with DNA from another organism, be it a bacterium, plant, virus or animal; these organisms are sometimes referred to as “transgenic” organisms. Genetics from a spider that helps the arachnid produce silk, for example, could be inserted into the DNA of an ordinary goat.

It sounds far-fetched, but that is the exact process used to breed goats that produce silk proteins in their goat milk, Science Nation reported. Their milk is then harvested, and the silk protein is then isolated to make a lightweight, ultrastrong silk material with a wide range of industrial and medical uses.

The dizzying range of GMO categories is enough to boggle the mind. CRISPR, a novel genome-editing tool, has allowed geneticists to breed GMO pigs that glow in the dark by inserting jellyfish bioluminescence genetic code into pig DNA. CRISPR is opening doors to genetic modifications the likes of which were unimaginable just a decade ago.

These are more comparatively wild examples, but GMOs are already very common in the farming industry. The most common genetic modifications are designed to create higher-yield crops, more consistent products, and resist pests, pesticides, and fertilizer.

According to the National Library of Medicine (part of the National Center for Biotechnology Information, or NCBI), genetically engineered, or GM, foods are those that have had foreign genes from other plants or animals inserted into their genetic codes. This has resulted in foods that are consistently flavored, as well as resistant to disease and drought.

However, the NCBI also maintains a list of potential risks associated with GM foods, including genetic alterations that can cause environmental harm. Specifically, it’s possible that modified organisms could be inbred with natural organisms, leading to the possible extinction of the original organism. For instance, the banana tree is propagated entirely through cloning methods. The bananas themselves are sterile.

By far, the biggest use of GMO technology is in large-scale agricultural crops. At least 90% of the soy, cotton, canola, corn and sugar beets sold in the United States have been genetically engineered. The adoption of herbicide-resistant corn, which had been slower in previous years, has accelerated, reaching 89% of U.S. corn acreage in 2014 and 2015, according to the U.S. Department of Agriculture.

One of the biggest draws for widespread adoption of GMO crops is pest resistance. According to the World Health Organization, one of the most widely used methods for incorporating pest resistance into plants is through Bacillus thuringiensis (Bt) genetics, a bacterium that produces proteins that repel insects. GMO crops that are modified with the Bt gene have a proven resistance to insect pests, thus reducing the need for wide-scale spraying of synthetic pesticides.

Anti-GMO activists argue that GMOs can cause environmental damage and health problems for consumers.

One such anti-GMO organization is the Center for Food Safety, which calls the genetic engineering of plants and animals potentially “one of the greatest and most intractable environmental challenges of the 21st century.”

“Genetically modified foods have been linked to toxic and allergic reactions, sickness, sterile and dead livestock, and damage to virtually every organ studied in lab animals,” according to the Institute for Responsible Technology, a group of anti-GMO activists.

“Most developed nations do not consider GMOs to be safe,” according to the Non-GMO Project. “In more than 60 countries around the world, including Australia, Japan and all of the countries in the European Union, there are significant restrictions or outright bans on the production and sale of GMOs.”

As You Sow is a nonprofit environmental watchdog focusing its research on how corporate actions affect our environment, including food production. According to Christy Spees, a program manager with As You Sow, GMO foods are dangerous “because the modifications are centered around resistance to toxic substances, such as pesticides and certain fertilizers. When dangerous chemicals are applied, plants use them to grow, and the food itself can be detrimental to our health.”

Why GMOs are good?

Many scientific organizations and industry groups agree that the fear-mongering that runs through discussions of GMO foods is more emotional than factual. “Indeed, the science is quite clear: crop improvement by the modern molecular techniques of biotechnology is safe,” the American Association for the Advancement of Science (AAAS) said in a 2012 statement.

“The World Health Organization, the American Medical Association, the U.S. National Academy of Sciences, the British Royal Society, and every other respected organization that has examined the evidence has come to the same conclusion: Consuming foods containing ingredients derived from GM (genetically modified) crops is no riskier than consuming the same foods containing ingredients from crop plants modified by conventional plant improvement techniques,” according to the AAAS.

Others point to the benefits of sturdier crops with higher yields. “GM crops can improve yields for farmers, reduce draws on natural resources and fossil fuels and provide nutritional benefits,” according to a statement on the website for Monsanto, the world’s largest manufacturer of GMOs.

Monsanto and other agriculture companies have a financial stake in the research and messaging surrounding GM foods and have the resources to fund research that reinforces their narrative. However, although there are plenty of scientific data that demonstrates the safety, efficacy and resilience of GM crops, genetic modification remains a comparatively new scientific field.

The argument over the development and marketing of GMO foods has become a political hot potato in recent years.

In November 2015, the FDA issued a ruling that only requires additional labeling of foods derived from genetically engineered sources if there is a material difference — such as a different nutritional profile — between the GMO product and its non-GMO equivalent. The agency also approved AquaAdvantage Salmon, a salmon designed to grow faster than non-GMO salmon.

According to Monsanto, “there is no scientific justification for special labeling of foods that contain GM ingredients. We support these positions and the FDA’s approach.”

According to GMO Answers, an industry group comprised of Monsanto, DuPont, Dow AgroSciences, Bayer, BASF, CropScience and Syngenta, GMO agricultural products are “by far the most regulated and tested product in agricultural history.”

Additionally, their website states that “many independent scientists and organizations around the world — such as the U.S. National Academy of Sciences, United Nations Food and Agriculture Organization, World Health Organization, American Medical Association and the American Association for the Advancement of Science — have looked at thousands of scientific studies and concluded that GM food crops do not pose more risks to people, animals or the environment than any other foods.”

The political issue that GMOs have become is almost as conductive as the scientific debate. However, after much discussion among various lawmakers across the U.S., the National Bioengineered Food Disclosure Standard (NBFDS) was passed into law at the beginning of 2019.

According to the NBFDS current federal statutes, starting in 2020, all food must bear a BE (bioengineered) label if it contains more than 5% bioengineered material. States are free to impose their own labeling requirements as well, though it seems that most jurisdictions are waiting for federal laws to be implemented before working on new legislation. One thing is for certain: the scientific and political discussions surrounding GMO foods aren’t going away any time soon.

Which Career Combines DNA Technology And Agriculture? Top 5 Most Harmful Foods For The Environment Microgreens: Goes From Trendy Vegetables To Functional Foods Wild Strawberry Aroma In Foods Comes From Fungus Growing On Fruit Waste Despite The Decline In US Pesticide Use, Pollinator Damage Is On The Rise Molecular Evidence For Horizontal Gene Transfer Between Plants And Animals

The focus of his research is soil fertility and plant nutrition, carbon sequestration, and reclaiming soil salinity. His master's degree in soil and environmental sciences has given him a combination of skills in writing research proposals, research papers, and planning, designing, and executing impacting field and lab experiments. Furthermore, he has developed strong analytical skills regarding data analysis using a variety of statistical software. He is highly competent at working both independently and cooperatively.

Protecting Species For The Good Of Global Climate

We use cookies to ensure that we give you the best experience on our website. If you continue to use this site we will assume that you are happy with it.Ok