North Carolina State University researchers designed a textile “Plant Armor” that forces insects to navigate a maze-like path if they try to reach a plant. The design was more effective at blocking insects from reaching cabbage plants in multiple experiments, compared with an alternative crop cover.

Plants Armor is a unique, chemical-free alternative for insect protection that uses a combination of organic and inorganic ingredients to form the armor. With the advent of new scientific developments in the 1970s and 1980s, it was finally possible to test effectively the effectiveness of various forms of plant Armor against insects like beetles and spiders. Even with all the benefits of plant Armor being gained through use, so to speak, sometimes people find themselves dissatisfied with the results.

Based on their findings, researchers said the Plant Armor could provide a more effective, chemical-free alternative for insect protection. “We found it’s possible to use this new technology to protect against insects we didn’t think we could protect against,” said the study’s first author Grayson Cave, a doctoral candidate at NC State.

“We’ve shown we can use a mechanical barrier that will protect against tobacco thrips and possibly other insects, allowing the plant to grow and thrive underneath.”

Plant cover designers often take into consideration the size of a plant’s leaves and branches when designing their designs. However, previously, plant covers have been designed to exclude insects based on size alone — like a window screen — researchers said. Yet, that strategy can be problematic for trying to keep out insects as small as tobacco thrips, which are about the size of a pencil point.

“To exclude insects that are really small using traditional textile cover designs, the size of the openings would have to be so small that it would also prevent water, air, and moisture from penetrating,” said the study’s senior researcher Mike Roe, William Neal Reynolds Distinguished Professor of Entomology at NC State. “We had to come up with another way of excluding the insects other than just based on pore size.”

To that end, the researchers designed a three-layer, 3D cover knitted using clear yarn in the outermost and innermost layers. The yarn, which can be made from recycled plastic, still allows sunlight to pass through but restricts insects from reaching plants. A knitted inner layer is sandwiched perpendicular to the two surrounding layers, creating a maze-like structure within the Plant Armor.

“With our design, the insect has to figure out how to get through the maze to get to the plant on the other side,” Roe said. “The tortuosity makes it more challenging to get through. The insect has a certain amount of time to find food or it will die. That time is relatively fast for a young insect.”

In the first of three experiments, researchers found it took significantly longer for insects to penetrate the Plant Armor. They placed a cabbage leaf and 10 tobacco thrips inside a Petri dish, separated by the Plant Armor or another crop cover. It took approximately three hours for five of the thrips to make it through the Plant Armor, while it took only 12 minutes for them to cross a commercially available, single-layer crop cover. In the same experiment with young, unfed caterpillars, their design was nearly 90% effective at preventing unfed young caterpillars from crossing the Plant Armor in 12 hours.

“In real life, the insect has a lot of other choices of where to go to find food; this was a worst-case scenario where they had only one place to go,” Roe said. “So we expect in the natural environment, the protection is going to be much greater.”

When researchers tested how well they could protect potted cabbage plants inside a cage with unfed caterpillars, uncovered plants were infested and almost completely eaten, while plants covered and sealed with Plant Armor were not. They did not find a single caterpillar on the covered plants after 10 days. 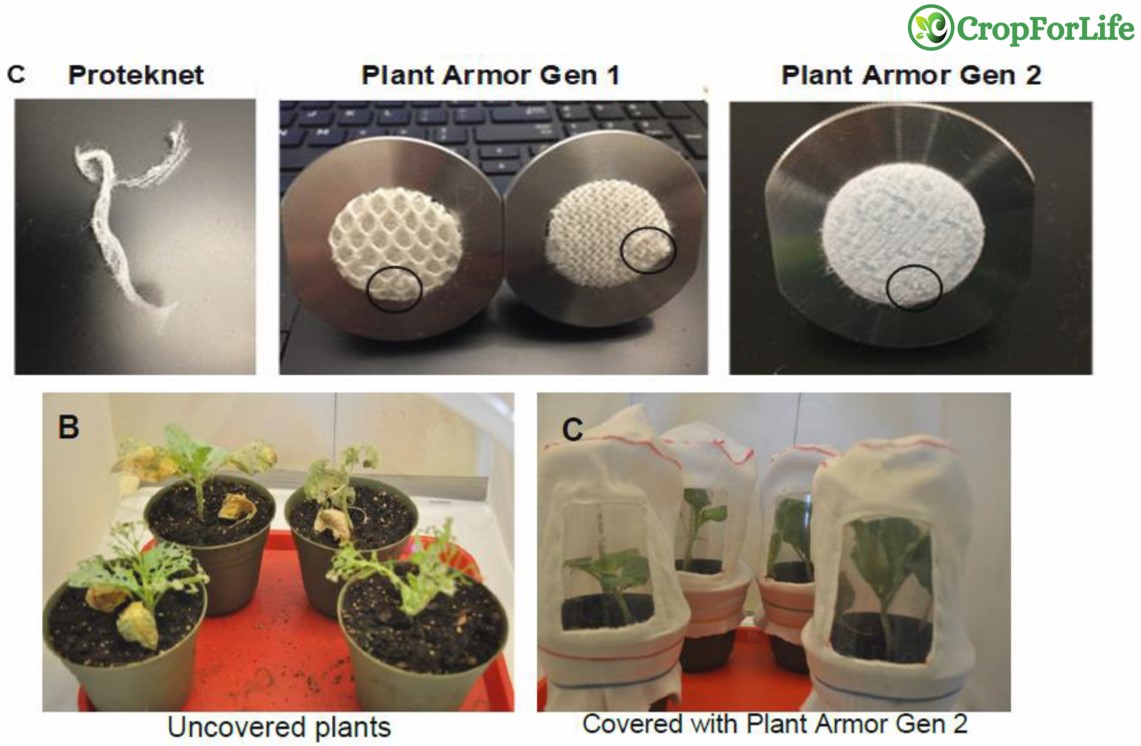 Their last experiment was a three-month, outdoor field trial testing how well the Plant Armor worked when they used it like a greenhouse cover. The researchers found plants covered with Plant Armor were larger on average; the weight of cabbages under the Plant Armor was almost three times larger than the control.

Researchers said more work is needed to determine whether they successfully excluded insects due to the thickness, pore size, or maze-like structure of the inner layer. However, their work provides evidence that their chemical-free design can work against tiny critters.

“Thrips are extremely tiny,” Cave said. “If we could keep them out, we think we have a good chance of keeping other, larger insects out. And as for the neonate caterpillars — they have to feed immediately, and they’re the tiniest stage of caterpillars. This gives us some good, preliminary data that this would work toward being protective against other caterpillars too.”

The researchers believe that covering the surface of their crops with plant armor could help to protect them from predators and change the environment so that high-value crops like grapes are not attacked by pests or grows plants in an environmentally delicate state. In future research, they also want to explore whether the cover could be used to help protect plants in extreme conditions — and as the climate changes.

“Part of what we’re doing is finding new, smart textiles,” said study co-author Andre West, associate professor of textile, apparel, and technology management at NC State and director of Zeis Textiles Extension. “We think this design could help farmers in extreme environments or where crop production is limited in certain areas. It could also be an alternative for organic farmers. Not only is the product itself made with some recycled materials, but it could also be recycled again.”

ALSO READ
Farm Fencing: What You Need To Protect Your Property

The study, “Novel 3-D Spacer Textiles to Protect Crops from Insect-Infestation and that Enhance Plant Growth,” was published online in the journal Agriculture. Co-authors include Marian G. McCord, senior vice provost at the University of New Hampshire and adjunct professor in the NC State Department of Forest Biomaterials; Bryan Koene and Benjamin Beck of Luna Innovations; and Jean M. Deguenon and Kun Luan, postdoctoral research scholars at NC State.

This paper is based upon work supported by the National Institute of Food and Agriculture, U.S. Department of Agriculture, under Agreement No. 2015-33610-23785 of the Small Business Innovation Research Grants Program. Any opinions, findings, conclusions, or recommendations expressed in this publication are those of the author(s) and do not necessarily reflect the view of the U.S. Department of Agriculture. Cave was supported in part by a teaching assistantship from NC State, and Cave and Roe are supported by N.C. Agricultural Experiment Station.

Conflicts of interest: Vector Textiles holds the exclusive license for a patent connected to the Plant Armor technology. McCord, Roe, and West are inventors on the patent related to the technology owned by NC State and would share in revenues derived from commercialization.

Note: Content may be edited for style and length.

In ‘Plant Armor’ crop cover, insects have to navigate textile maze We should be eating more insects and using their waste to grow crops, says plant ecologist ADB And French Firm Sign $100M Loan To Support Small Farmers Selective Breeding Innately Wards Off Honey Bees From Varroa Mite The forest as a shelter for insects in warmer climates? Beneficial insects are exposed to insecticides through honeydew