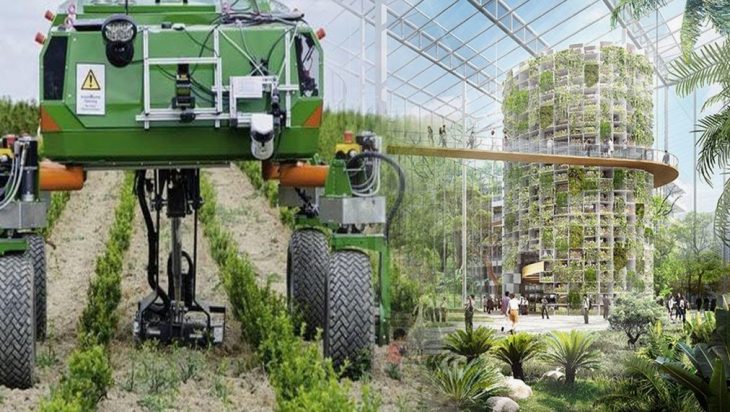 Shimmering images of megalopolises like Shenzhen or glimmering high-speed rail networks have given rise to China’s reputation for breakneck modern infrastructure development. However, China continues to struggle with the effective management of its large rural population.

While this large segment of the population has shaped China into the world’s largest agricultural producer, China’s 1.4 billion mouths to feed have also pushed the nation to become the largest overall food and meat, importer.

Still, a blazing exodus of rural migrants to cities and a quickly aging rural population has become a clear concern for Beijing as it addresses the sustainability of Chinese agriculture and food security.

Specifically, farmers are increasingly adopting 5G network capabilities, cameras, smart sensors, and drones into farming practices, which has, in turn, unlocked new industry opportunities for big-tech companies such as Alibaba, Pinduoduo, and Netease.

Why Is China Concerned Over Food Security?

Food security has become a key concern for Beijing. According to the 2020 Rural Development Report, China could face a grain shortage of nearly 130 million tons by 2025. Over the short term, the insecurity is largely fueled by the rapid urbanization of the Yangtze River region, which has become more prone to flooding and crop destruction.

Despite the country’s large agricultural labor force, China’s aggregate output is underwhelming relative to other countries. For example, between 250 and 270 million laborers in China contribute to the agriculture sector, while an additional 300 million work in related secondary industries.

Among the nearly 550-570 million industry participants, China produces a little more than 600 million tons of food annually. By contrast, the US produces over 400 million tons with just 3 million farmers, signifying a production rate that is nearly 100 times higher for a farmer in the US than in China. 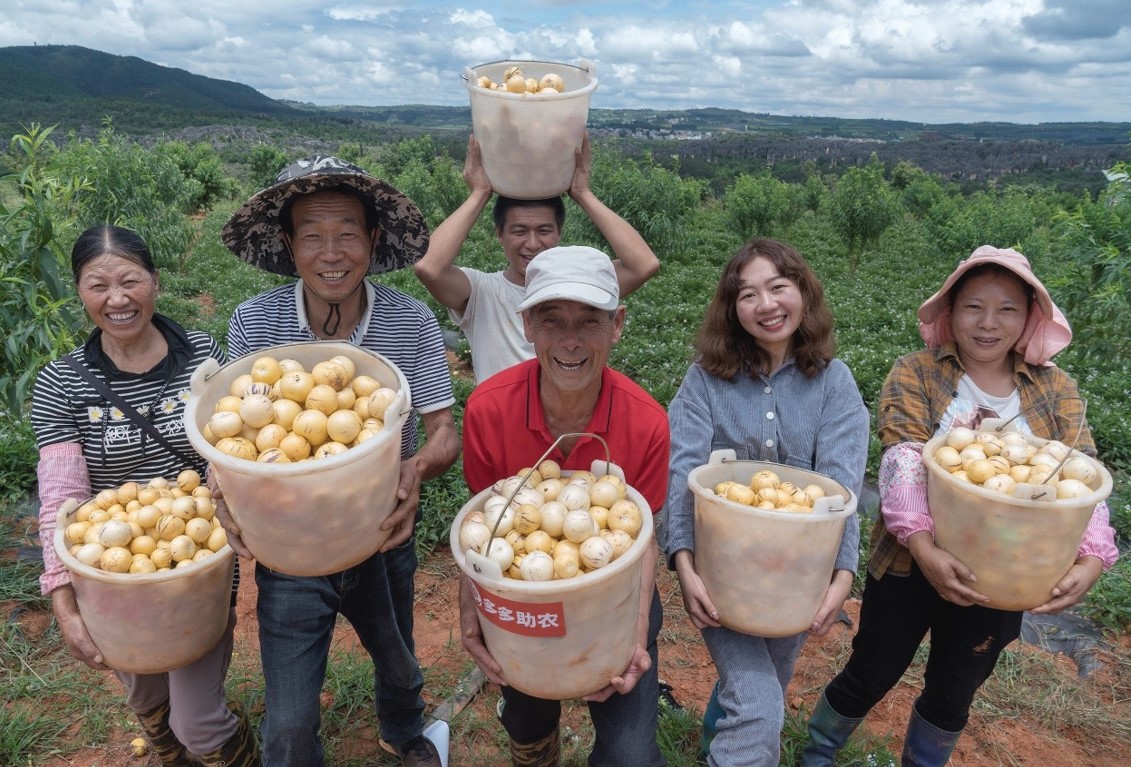 China commands an impressive landmass, but scarce arable land has plagued the country since ancient times. The average farm size in China is around 0.5 hectares, or about half the size of an American football field, which is usually further distributed into smaller plots.

Due to an inefficient land allocation process based on soil quality grades and organized by local governments, farmers often find their farmlands scattered across disjointed or non-contiguous pieces of land – making it less efficient to cultivate farmland en masse.

Furthermore, many rural regions – particularly in China’s central and southern regions – have hilly and uneven terrains that challenge farmers to employ ancient agricultural practices like “terrace farming.” This method of farming, while well suited for fueling agro-tourism and picturesque landscapes, requires a much higher amount of labor from individuals and is unable to employ modern innovations in farming techniques and equipment. For this reason, much of China’s farming population is unable to produce larger crop yields than what is needed to sustain their livelihoods through subsistence farming.

China is home to some of the most robust supply chain networks across the globe. However, the last mile distribution costs to and from many of China’s most remote areas make it unfeasible to access much of China’s farmland.

Due to the lack of logistics in rural China and poorly maintained cold-chain infrastructure that supports refrigerated vehicles, warehouses, and processing plants, around 25-30% of all agricultural products in China rot away instead of filling consumers’ bellies. By comparison, this rate hovers closer to 5% in developed countries. All considered China’s labor-intensive farming practices require more effort for less output.

How Is China Addressing Food Security?

Over the past several years, poverty alleviation has been the primary focus for Beijing’s policymakers in China’s push towards rural revitalization. This culminated in Chairman Xi Jinping celebrating in 2020 the eradication of extreme rural poverty in China and the country taking a significant step towards a xiǎokāng shèhuì, a Chinese term used to describe a well-off and expanding middle class. 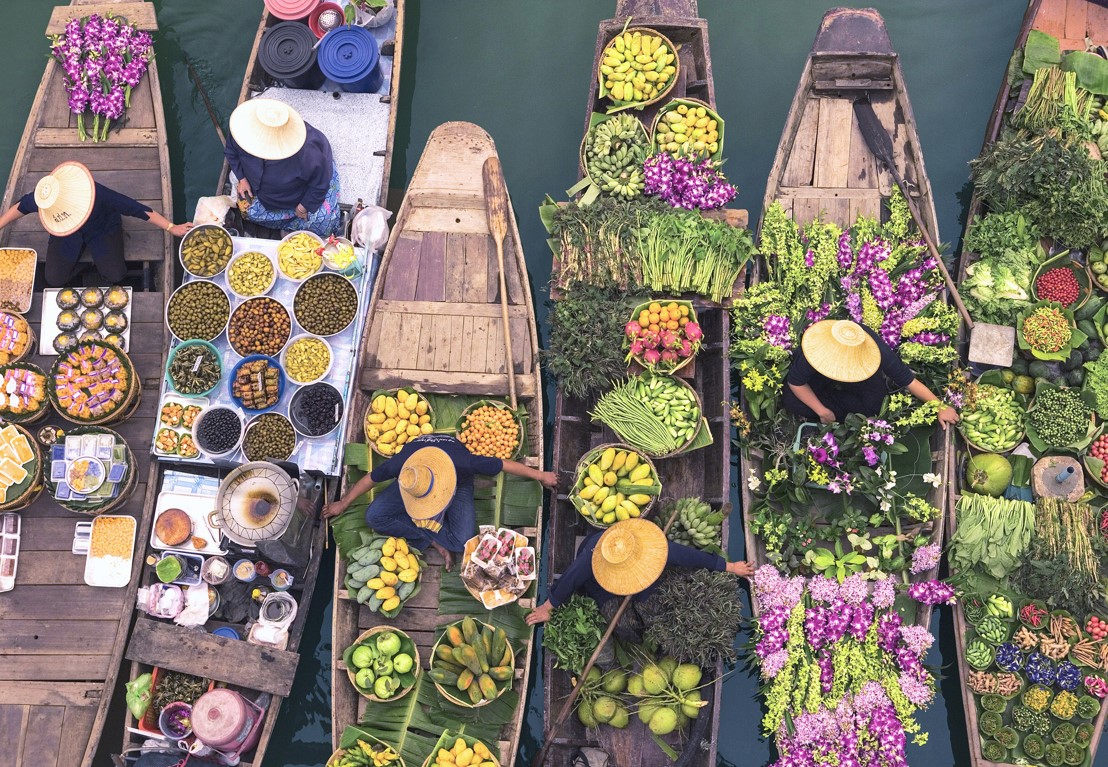 Ever since policymakers have shifted their focus to agricultural security. This is most aptly demonstrated by China’s Central Committee highlighting agricultural issues within its No. 1 Central Document, which refers to the first policy statement released from central authorities in any given year, in 2020.

In addition, Xi Jinping specifically announced that the efficiency and quality of China’s agricultural sector must be promoted and improved.

Chinese policymakers’ approach can be summarized in seven keywords: to accelerate rural development (Speed), academics should publish further work on agricultural issues (Research); pollution prevention and controls should be considered (Environment), as well as reform in key fields in rural areas (Development); finally, rural-focused infrastructure (Infrastructure) should be prioritized through better integration of urban-rural developments (Integration) and a general improvement of rural governance (Governance).

Technology will play a significant role in bolstering national food security and agricultural production to continue revitalizing China’s rural communities. According to a member of the Ministry of Agriculture and Rural Affairs (MARA), “the digitalization of rural industries is key to developing the countryside, and it is a new driver of a sustainable rural economy.”

This has consequently given rise to the discussion over “smart agriculture,” “intelligent architecture,” and rural development policies, and particular attention has been paid to the potential inclusion of blockchain technology, big data, and Internet of Things (IoT) projects in agriculture. 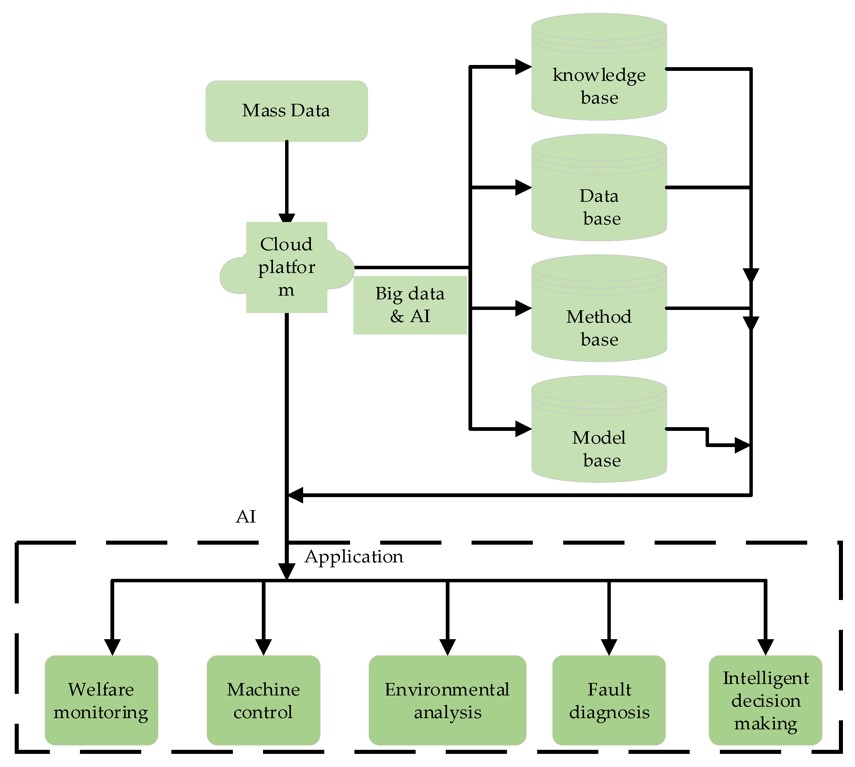 Alibaba, one of China’s most influential tech giants, has brought IoT and big data to the agriculture industry through modernized, smart agricultural centers.

These centers employ smart technologies that automate and optimize a wide array of labor-intensive tasks. Alibaba’s greenhouse project, for example, is the culmination of a partnership with a Shouguang city vegetable farm.

In this, Alibaba employed IoT technologies to automate many processes within the crop production process, including planting, watering, and harvesting.

Then, using big data analytics, supervisors were able to remotely and accurately track the temperature, humidity, and pH levels of the crops to maintain healthy crop production conditions. In total, introducing IoT technologies and big data analytics into the smart farming process resulted in a six-fold increase in the farms’ output.

A thorough review of China’s food security also requires a review of the nation’s high food waste levels. According to a study conducted by the Chinese Academy of Social Sciences, restaurants in China’s cities waste 17 million to 18 million tons of food a year, enough to feed 30 million to 50 million people.

To address this, policymakers implemented a wide-ranging policy that can see fines of up to US$15,500 on broadcasters and streaming services involved in content that promotes binge eating, while excessive orders by restaurant customers can be fined up to US1,500 per offense. These statistics are also non-inclusive of the 25-30% of all agricultural produce in China that expires before reaching the end consumer. 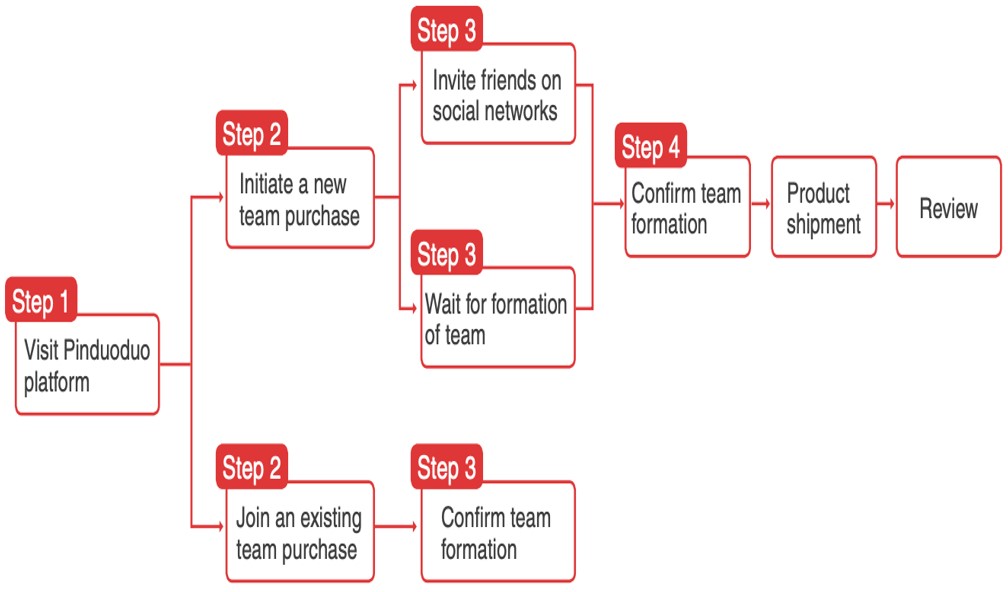 Alibaba’s “Taobao Villages” and Pinduoduo’s AgroTech solutions, however, may present an alternative solution to the nation’s massive food waste problem. Alibaba’s Taobao Villages are rural e-commerce programs that are developed in areas with many agriculture entrepreneurs that enable farmers to sell directly to consumers.

Through these social developments, made possible by the integration of agriculture and e-commerce technology solutions, farmers have seen increased rates of success when selling their products to consumers. Moreover, rural communities that have been designated as Taobao Villages have seen an incredible economies-of-scale effect in which these areas then enjoy hastened economic and social progress through local infrastructure development, including crop storage, cold-storage shipping, inclusion on platform economies, and more.

While drones have unlocked new opportunities for recreation, tourism, and more, the technology has also been adapted for use within the agriculture industry. Farming has historically been a labor-intensive endeavor, requiring constant seeding, pollination, crop spraying, and harvesting. 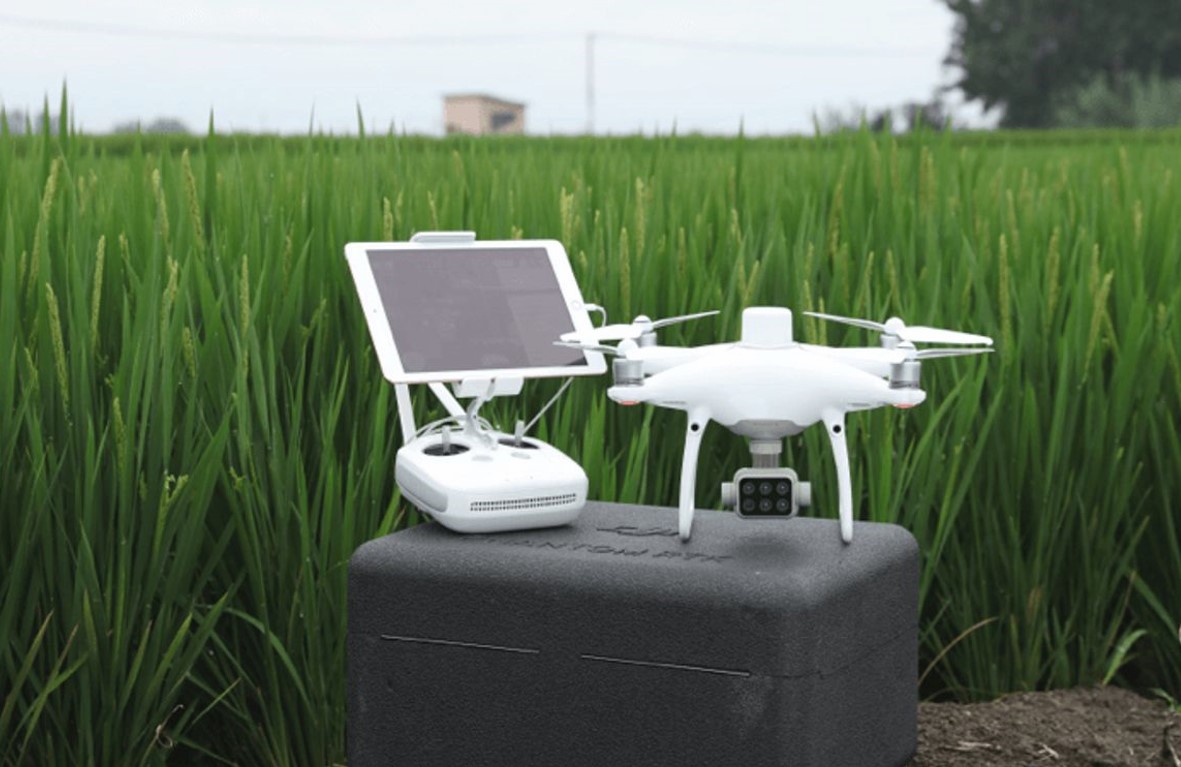 Drones and other modern AgroTech solutions can automate these operations, lower expenses, and boost production efficiency across all phases of the farming lifecycle.

Modern innovations in terrain imaging, crop monitoring, seeding, and pesticide distribution have all been made available to even the smallest of farming operations by use of drones.

For example, in mountainous and other otherwise inefficient plots of farmland, it has historically taken three farmers approximately one week to apply pest control products to their crops. One pilot with a single drone can accomplish the same task in just a few hours.

China is already an emerging leader in the inclusion of drones in agriculture, and around 70% of all non-military drones globally are manufactured by the Chinese company DJI. China has taken early advantage of the nascent technology, and by 2017, 13,000 agriculture drones had already been in operation throughout the country. Training centers specialized in drone piloting for agricultural purposes have sprung up across the nation and have given rise to a new class of rural workforce.

Will China Reap the Benefits of AgroTech Innovation?

The emerging rise of AgroTech solutions in rural agriculture is quickly transforming this ancient industry into an attractive career path for many young Chinese. Expressions such as xīn nóngrén, or new farmers, have taken the country by storm.

Consumers have even become captivated by agriculture on social media platforms such as Douyin, the Chinese TikTok counterpart, in hour-long live streams hosted by farmers themselves in which they introduce their products, best consumption practices, and in some cases, simply create a character that the urbanites can relate to and follow.

As China gradually transitions its focus from overseas markets to local demand through the dual circulation model, China’s agricultural industry will begin to see higher activity as domestic companies redouble their efforts on adapting solutions for the rural economy.

At the end of the day, one thing is certain – through supportive policy, robust private and public investment, and technological innovation all underpinning industry development, China’s agricultural industry is modernizing at a breakneck pace and is well on its way to supporting the nation’s 1.4 billion population for years to come.