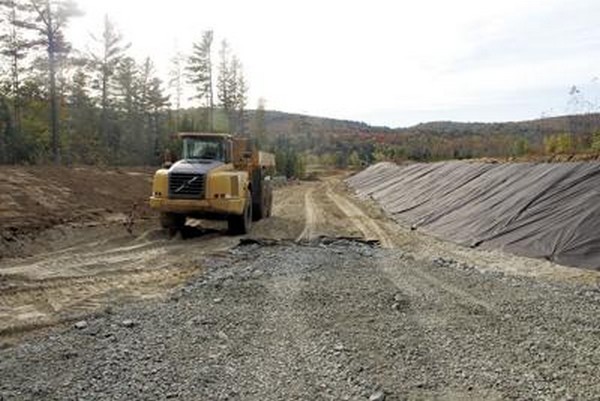 Largely hidden from view, North Country Growers is completing the site work for its greenhouse project and hopes to begin constructing the first greenhouse next month. A subsidiary of American Ag Energy, NCG is proposing to build and operate two 10-acre greenhouses that will produce 15 million heads of lettuce and 8 million pounds of tomatoes annually.

Last August, AB Construction of Lancaster began the site work, including the main road and the water and sewer connections. American Ag Energy CEO Richard Rosen said he expects the site work to be completed within the next month. He noted with pride that many people are unaware of the work underway on the 172-acre site, which is set back from the East Side Road. He said everything is being done properly, and any dust from the work is being controlled.
“They are doing a magnificent job,” he said.

Rosen said he anticipates holding a ribbon-cutting in July when they start constructing the first greenhouse. He explained that the lettuce greenhouse will go up first. He expects it to be finished by November and will do some test runs before moving into commercial operation next spring. “You should do it a few times before you sell it,” he said.
Once the first greenhouse is done, Rosen said they will immediately start the second. He anticipates the tomato greenhouse will be finished in spring 2033. His ultimate goal is to have 50 acres of the greenhouse here, and Rosen said he has identified other sites in Berlin and Milan.

ADVERTISEMENT
Useful Article:  Tomato cultivation increased by 29.5% in the Argentine province of Mendoza

Local produce
Rosen notes that 95 percent of tomatoes and lettuce at supermarkets come from California, Mexico, Arizona, and Florida, and it takes five to six days to get to market. He will serve the New England market with produce picked just the day before.

He said the operation will employ about 80 full-time people and Rosen said he will pay good wages and benefits, including possible child care. He expects to start interviewing potential employees this fall.
Rosen and North Country Growers have worked for almost six years to get to this stage. Rosen said it was a “very complicated” project with a lot of impediments and praised city officials for being supportive.

US (NH): How a new greenhouse project in Berlin aims to help produce more local food

The company went through nine options on the city-owned property before purchasing it for $645,000 at the end of 2020. The state legislature passed a bill authorizing NCG to negotiate a 20-year payment-in-lieu of tax agreement with the city that allows annual payments that are lower in the early years as the facility is built and then increase in later years. Rosen praised city officials for being supportive.

Useful Article:  "Always looking for ways to showcase eggplants to the general public"

Special Greenhouse Construction Time-lapse video of the construction of a 15-hectare greenhouse in Canada US (NH): How a new greenhouse project in Berlin aims to help produce more local food “Growers buy an expensive greenhouse yet pay (too) little attention to a well-designed Irrigation & Electrical system” The last window is set at Schenkeveld Schiphol Dutch growers welcome visitors during sunny edition of ‘Visit the greenhouse’