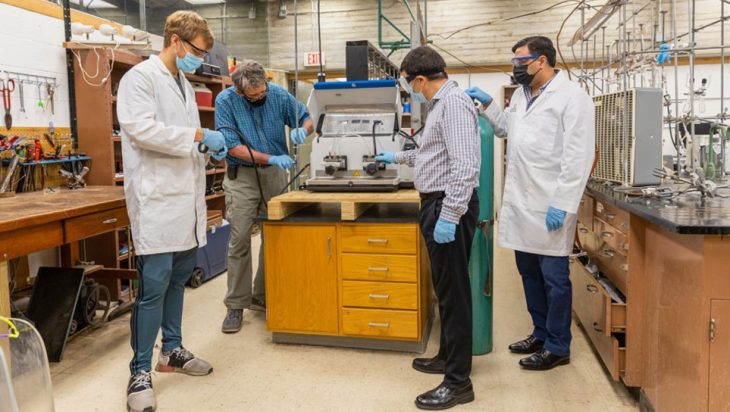 A team of international scientists led by Nanyang Technological University, Singapore (NTU Singapore) has devised a new ‘greener’ method to make a key compound in fertiliser, and that may pave the way to a more sustainable agricultural practice as global food demand rises.

Devised by NTU researchers, the method produces a compound known as ‘urea’, which is a natural product found in the urine of mammals, and an essential compound for fertilisers that is mass-produced industrially to increase crop yields.

Seeking a more sustainable and energy-efficient method, the team found a way to greatly improve an existing alternative approach to urea production known as electrocatalysis — using electricity to drive chemical reactions in a solution.

Using the nanomaterial indium hydroxide as a catalyst, the researchers reacted nitrate and carbon dioxide and found that the process formed urea five times more efficiently than previously reported attempts using electrocatalysis, specifically by causing the chemical reaction to take place in a ‘highly selective’ manner.

Co-lead author of the study, Professor Alex Yan from the NTU School of Materials Science and Engineering (MSE) said, “Our method essentially manipulates the chemical reaction process to become ‘highly selective’. By picking a better catalyst, we helped the nitrate ions and carbon dioxide molecules to optimally position themselves to facilitate urea formation, while suppressing the creation of unnecessary by-products like hydrogen, leading to higher efficiency and better urea yields.”

The study findings are published in the peer-reviewed scientific journal Nature Sustainability in July, and the alternative urea production method has been patented by NTU.

This new method to produce urea may inspire the future design of sustainable chemistry approaches and contribute to ‘greener’ agricultural practices to feed the world’s growing population, say the research team.

The study reflects the university’s commitment to address humanity’s grand challenges on sustainability as part of the NTU 2025 strategic plan, which seeks to accelerate the translation of research discoveries into innovations that mitigate our impact on the environment.

As a proof of concept, the scientists tested the efficiency of their devised method in the lab and found that the approach achieved a urea yield of 53.4 per cent, which is competitive with the current Haber-Bosch industrial method, that was first demonstrated in 1910.

The Haber-Bosch, a two-step thermal process, is fossil fuel reliant and can only happen at specific high temperatures, and high-pressure conditions. First, nitrogen and hydrogen are combined to make ammonia. Carbon dioxide is then bonded with it to make urea. By comparison, the new NTU approach is more environmentally friendly and simpler. It uses nitrate — a compound with bonds that require less energy to break — carbon dioxide, and hydrogen to directly trigger urea formation under room temperature.

The new method is simple enough to be adopted at both large and small scales, say the research team. The electrocatalytic device could be easily operated by farmers to generate their own urea for fertilisers. The method could also one day be powered entirely by renewable energy.

First author of the research, Dr Lyu Chade, Research Fellow from the NTU School of MSE said, “With advances in solar technology, we may potentially use sunlight to power the electrocatalysis process in future, which can further help lower global emissions.”

As the next steps, the research team is aiming to achieve even higher yield results and to refine the catalytic selectivity, by exploring catalysts that would trigger faster reactions. They also plan to find a way to power the process using solar energy and to create a prototype device to demonstrate scaled up urea production.

The international research team includes researchers from the University of Texas at Austin, University of Science and Technology of China and Harbin Institute of Technology, China.