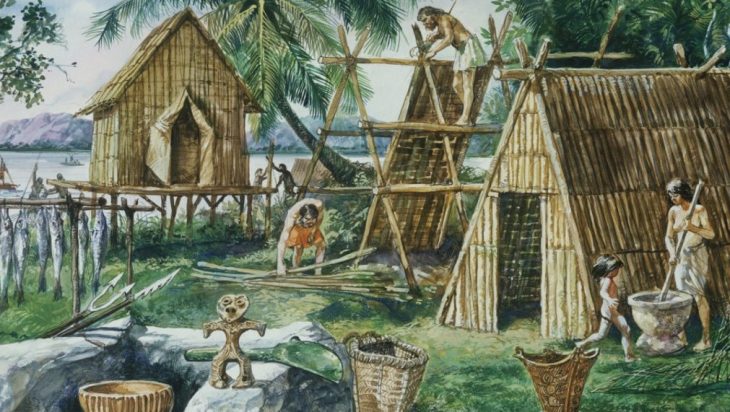 Familiar explanations of why hunter-gatherers first took up farming, superior labor productivity, population pressure, or adverse climate, receive little support from recent evidence. Farming would be an unlikely choice without possession-based private property, which appears to have existed among rare groups of sedentary hunter-gatherers who became the first farmers.

Once independently established, the Neolithic economic model (farming plus private property plus sedentism) out-reproduced foraging populations. Moreover, the larger concentrations of population and the subsequent emergence of hierarchical political systems and eventually states were to give farmers a decisive military advantage over foragers, allowing the further spread of the Neolithic model.

This diffusion of farming and its associated property rights took place through a process of cultural group selection implicit in the evolutionary thinking of Parsons (1964), Hayek (1988), Tilly (1990), and others. But we have addressed the independent emergence of farming and a new system of property rights, not its spread.

Our interpretation of the Neolithic agricultural revolution is a contribution to the literature questioning the common view that changes in economic institutions are accommodations to prior technical innovation.

A prominent example of this “technology-first” line of reasoning is the account by Demsetz (1967) of the emergence of private property among Native Americans engaged in the fur trade: new property rights, he wrote (350), “stem from the development of new technology and the opening of new markets, changes to which old property rights are poorly attuned.”

This perspective, dating back to the writings of Marx ([1859] 1904), has provided a fruitful framework for the study of institutional evolution.

By contrast, our interpretation of the Neolithic agricultural revolution is consistent with the idea that institutional change may predate and provide conditions for subsequent technical change. Examples of this “institutions-first” perspective include the role of credit contract enforcement in promoting the farming of cotton, rather than vegetables.

Among former slaves in the antebellum US South the emergence of factory employment of wage workers replacing the putting-out system in Great Britain, in some cases before any significant technical innovations the effect of political power on the strength of one’s property rights.

Hence on land use in West African agriculture the contribution of institutions that sustained high wages in eighteenth-century England to induced labor-saving technical change and the industrial revolution and the fact that premodern agrarian autocracies often required farmers to cultivate easy-to-expropriate-and-store cereals rather than root crops.