Home
Featured
Macro Profits Can Be Made From Microgreens 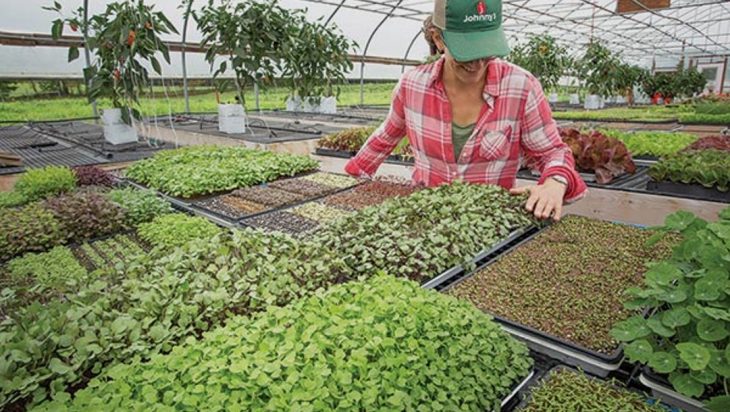 While they spend their days pulling up big carrots and beets, they are also growing something much smaller microgreens. Also called shoots, microgreens are the cotyledon stage of a plant that is grown in soil and cut above the soil.

These immature plants pack a nutritional punch, with higher nutritional values than their mature stage. Pea and sunflower shoots are even considered complete proteins, with all their seedy goodness still contained in the tender leaves.

“They are versatile and quick, manageable and predictable,” Holly Hammond said,

The production, from seeding to harvest, varies from 10-30 days, depending on what is being grown and the time of year and day length.

In 2019, the Hammonds’ first year producing microgreens, they sold 6,000 2.75-ounce bags of microgreens and netted about $17,000, putting in roughly 12 labor hours a week. Whisper Hill, which greatly expanded its CSA this year, was grateful to have the greens to fill in the gaps in the spring and fall seasons, too, when their field crops were not producing enough.

The materials needed to start a microgreen operation are minimal, with lots of ingenuity as an option for lower budgets. Materials needed are shallow plastic pans with drainage holes, called flats, a soil substrate, growing space with adequate heat, plastic sheets to cover the flats, a board to tamp down soil, scissors or knife, a scale, a salad spinner or laundry bag to spin by hand, and a weight or brick.

Hammond uses a one-to-one mixture of Pearlmix MP and Vermont Compost for her soil mix. Each flat receives 2 pounds of soil.

Holly Hammond of Whisper Hill Farm in Scottsville, Va., demonstrates how to spread pea seeds on tamped down soil.

For things that have large seeds, such as peas and sunflowers, the soil is tamped prior to seeding so the seeds can be spread by hand over the soil. These seeds are also soaked up to 24 hours ahead of time to speed up germination.

For small seeds, like arugula, cilantro, or basil, the seeds are sprinkled evenly across the soil and then it is tamped down. The flats are watered after being seeded and then stacked about four high, with weight put on top to ensure seed and soil contact.

The flats are kept in a germination room that is roughly 75-80 degrees F until there is uniform germination, ranging from three to eight days, depending on what is being grown.

The taller shoots, like peas and sunflowers, are harvested with a knife, whereas the smaller greens, such as arugula or cilantro, are cut with scissors.

Whisper Hill rinses the greens, spins them dry, and sells them in 2.75-ounce bags for $3.50 a bag. One flat of greens can produce three to six bags. Once cut, the microgreens can store for two to three weeks refrigerated.

The most difficult part of producing microgreens, according to James Hammond, is the dedication to stay on a weekly seeding routine.

For Whisper Hill, an additional benefit is being able to keep an employee in the winter. Holly Hammond also sees this as a viable enterprise for aging farmers.

Useful Article: Hot Market For Microgreens Will Continue Into 2021