Home
Pakistan
KPK Has Capacity To Produce More Than 30,000 Metric Tonnes Of Honey 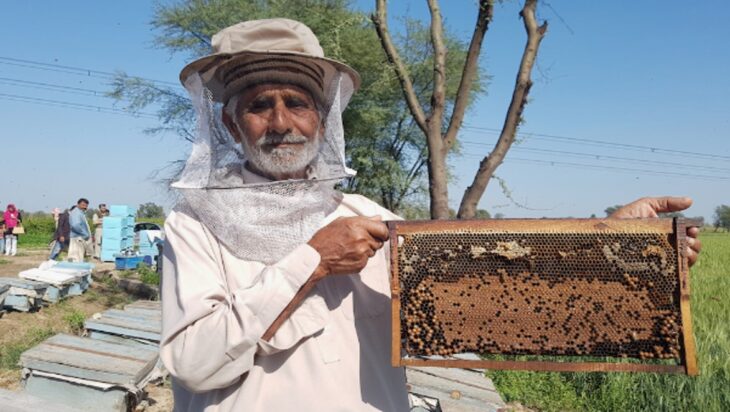 During a visit to Sidr (Ber) fields in Takht-i-Nusrati area of Karak district on Monday, Governor Shah Farman was informed that Karak, Kohat, Lakki Marwat and Dera Ismail Khan districts were suitable for production of Sidr honey.

An official statement said that the officials told the governor that Rs200 million had been approved in the current Annual Development Programme for the honey production initiative in the province and an accredited honey quality testing laboratory would also be established in the province.

However, honey producers rejected the claim of the agriculture department and said that the department had no contribution towards their capacity building or giving them facilities to increase the production.

“The claim by the officials of the agriculture department is restricted to briefings, while on the ground they have done nothing for this vital sector,” Asadullah Khan, a member of All Pakistan Beekeepers, Exporters and Honey Traders Association, told Dawn.

He said that officials of the agriculture department had been talking about establishing a laboratory in Peshawar and provision of other facilities to the beekeepers and honey producers, but they did nothing on the ground.

“The association’s members had met Prime Minister Imran Khan, former chief minister Pervez Khattak and other officials, but in vain,” he said, adding that now Governor Shah Farman was taking interest for increasing honey production and building capacity of the beekeepers.

According to local traders, around 300 containers, each containing 20 tonnes of honey, are exported to the Gulf States mostly Saudi Arabia and United Arab Emirates (UAE). They said that Karak district produced the world best quality of Ber honey after Yemen and its production could be enhanced if the government grew Sidr forests in the area.

They said that despite substantial production of different variety of honey, the province was unable to capture international market because of lack of state-of-the-art packing and processing facilities, forcing traders to export honey to Gulf States in plastic cans.

Governor Shah Farman, according to the official statement, said that high potential of Sidr honey was a great blessing for the province.

He said that barren land at large scale in southern districts was very suitable for Sidr cultivation and for this purpose all resources would be provided to the local landowners for the production of honey.

Talking to the locals, he said that the province had huge potential for production of Sidr honey, which was considered one of the best and most favourite honey in the entire world due to its good taste and the quality to remained liquid even in minus temperature.

The governor said that government was serious to make the initiative successful because it would make it capable to generate approximately Rs10 billion annually.

Read More: KP Has The Most Suitability For Olive Farming
Read More: Pakistan To Award 100 Licenses To Grow Hemp