Click here for more research from AgFunder and sign up to our newsletters to receive alerts about new research reports.

Climate investors may want to take a closer look at emerging opportunities in vertical farming. Or insect farms. Or pea milk. Or vegan leather.

In fact, there’s a long list of agrifood technologies across indoor farming, alternative protein, farm robotics, and biomaterials, that could be relevant for investors with a climate-forward agenda, according to new research from AgFunder and Invest-NL.

The overwhelming majority of the investments in these four categories could be considered climate-positive, according to AgFunder’s Climate Investing in European AgriFoodTech in 2022 special report, produced in partnership with Invest-NL, the state-backed Dutch impact investor. It was released last week as an addendum in the Europe AgriFoodTech Investment report in collaboration with F&A Next.

California agrifoodtech investment outpaces the rest of the US by billions

Trillions of dollars are needed annually to meet the goals of the Paris climate accord. Just $630 billion in climate finance was committed last year. With the agrifood value chain’s pivotal role in climate change — it contributes to around one-third of all greenhouse gas emissions — and its potential for climate change adaptation and mitigation, there is enormous untapped opportunity for technologies that can support the transition to a more sustainable and circular food system.

In European agrifood VC, the climate investing opportunity is particularly under-exploited. Of the $9.2 billion that was invested in agrifoodtech last year, just 25% went to startups developing technologies that could positively impact the environment.

“Climate-positive”: what does that mean for the agrifoodtech space? AgFunder worked with Invest-NL to identify filters for the types of technologies that could have a positive environmental impact on how food is produced, consumed, and disposed of (or better, reused.)

We looked for startups facilitating the shift to sustainable farming. Examples include companies like Germany’s Stenon, a farm management software and sensing venture that makes sensors for real-time soil analysis, and France’s Micropep Technologies, an agbiotech company that is developing biological alternatives to agro-chemicals.

And we looked for companies supporting greater circularity in the food system by reducing food waste, developing environmentally-friendly food packaging, and recycling or upcycling agri-waste streams. Examples include France’s Pyxo, a reusable packaging company that is trying to reduce single-use food containers, and the Netherlands’ Orbisk, which makes monitoring devices for waste bins to monitor and help curb food waste.

The agrifoodtech category that raised the most “climate capital” in Europe last year was Novel Farming Systems, which includes indoor agriculture and aquaculture. The $560 million invested in technologies with a potentially positive climate impact accounted for 99.9% of capital invested in the category in Europe in 2021. 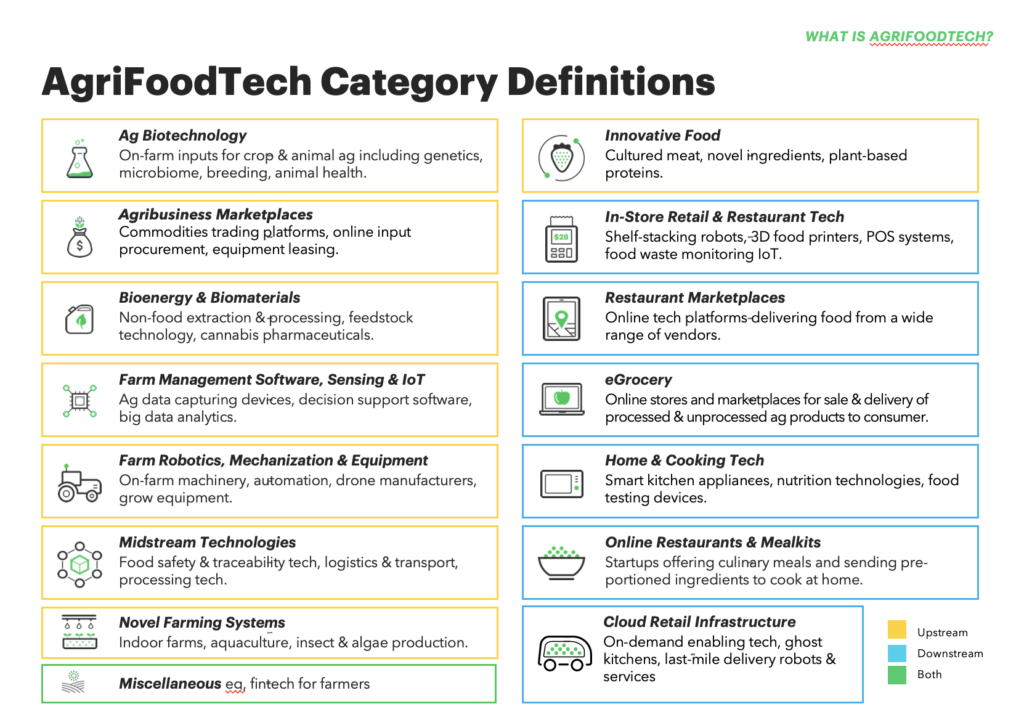 One company, German vertical farming startup Infarm, raised most of the capital in the sector: $300 million. Also on the list: French insect farming venture Agronutris and Intelligent Growth Solutions from the UK. [Disclosure: AgFunder, AFN’s parent company, is an investor in IGS.]

Other sectors where companies are significantly aligned to climate issues: farm robotics and mechanization and farm management software and sensing.

In fact, a number of the sectors that have the greatest climate impact potential actually lost funding last year. Capital for novel farming systems decreased 23% from 2020. Farm robotics and mechanization investments fell 28%, bioenergy and biomaterials fell 21%, and farm management software and sensing fell 4%.

For investors concerned about climate issues, these are the agrifoodtech sectors to support.