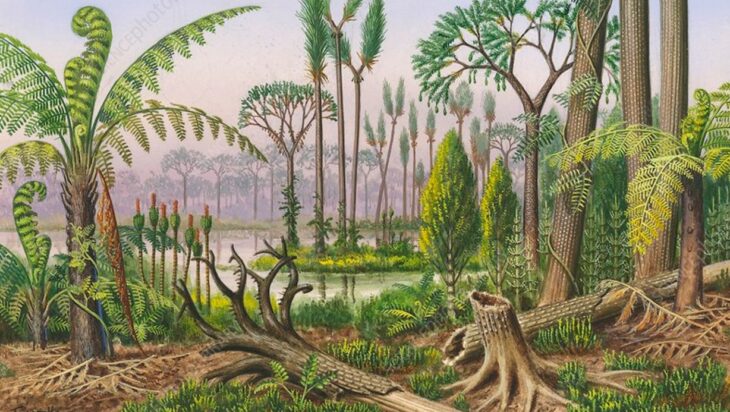 A Stanford-led study reveals that rather than evolving gradually over hundreds of millions of years, land plants evolved major diversification in two dramatic bursts, 250 million years apart. The first occurred early in plant history, giving rise to the development of seeds, and the second took place during the diversification of flowering plants.

The research uses a novel but simple metric to classify plant complexity based on the arrangement and number of basic parts in their reproductive structures. While scientists have long assumed that plants became more complex with the advent of seeds and flowers, the new findings, published Sept. 17 in Science, offer insight to the timing and magnitude of those changes.

“The most surprising thing is this kind of stasis, this plateau in complexity after the initial evolution of seeds and then the total change that happened when flowering plants started diversifying,” said lead study author Andrew Leslie, an assistant professor of geological sciences at Stanford’s School of Earth, Energy & Environmental Sciences (Stanford Earth). “The reproductive structures look different in all these plants, but they all have about the same number of parts during that stasis.”

Flowers are more diverse than every other group of plants, producing colors, smells and shapes that nourish animals and delight the senses. They are also intricate: petals, anthers and pistils interweave in precise arrangements to lure pollinators and trick them into spreading pollen from one flower to another.

This complexity makes it difficult for scientists to compare flowering plants to plants with simpler reproductive systems, such as ferns or some conifers. As a result, botanists have long focused on characteristics within family groups and typically study evolution in non-flowering plants separately from their more intricate flowering relatives.

Leslie and his co-authors overcame these differences by designing a system that classifies the number of different kinds of parts in reproductive structures based on observation alone. Each species was scored according to how many types of parts it has and the degree to which it exhibited clustering of those parts. They categorized about 1,300 land plant species from about 420 million years ago until the present.

“This tells a pretty simple story about plant reproductive evolution in terms of form and function: The more functions the plants have and the more specific they are, the more parts they have,” Leslie said. “It’s a useful way of thinking about broad-scale changes encompassing the whole of plant history.”

From shrubs to blooms

When land plants first diversified in the early Devonian about 420 million to 360 million years ago, Earth was a warmer world devoid of trees or terrestrial vertebrate animals. Arachnids like scorpions and mites roamed the land amongst short, patchy plants and the tallest land organism was a 20-foot fungus resembling a tree trunk. After the Devonian, huge changes occurred in the animal kingdom: Land animals evolved to have large body sizes and more varied diets, insects diversified, dinosaurs appeared — but plants didn’t see a major change in reproductive complexity until they developed flowers.

“Insect pollination and animal seed dispersal may have appeared as early as 300 million years ago, but it’s not until the last 100 million years that these really intricate interactions with pollinators are driving this super high complexity in flowering plants,” Leslie said. “There was such a long period of time where plants could have interacted with insects in the way that flowering plants do now, but they didn’t to the same degree of intricacy.”

In the Late Cretaceous, about 100 to 66 million years ago, Earth more closely resembled the planet we know today — a bit like Yosemite National Park without the flowering trees and bushes. The second burst of complexity was more dramatic than the first, emphasizing the unique nature of flowering plants, according to Leslie. That period gave rise to plants like the passionflower, which can have 20 different types of parts, more than twice the number found in non-flowering plants.

The researchers classified 472 living species, part of which Leslie carried out on and around Stanford’s campus by simply pulling apart local plants and counting their reproductive organs. The analysis includes vascular land plants — everything except mosses and a few early plants that lack supportive tissue for conducting water and minerals.

“One thing we argue in this paper is that this classification simply reflects their functional diversity,” Leslie said. “They basically split up their labor in order to be more efficient at doing what they needed to do.”

Study co-authors include Carl Simpson of the University of Colorado Museum of Natural History and Luke Mander of The Open University.