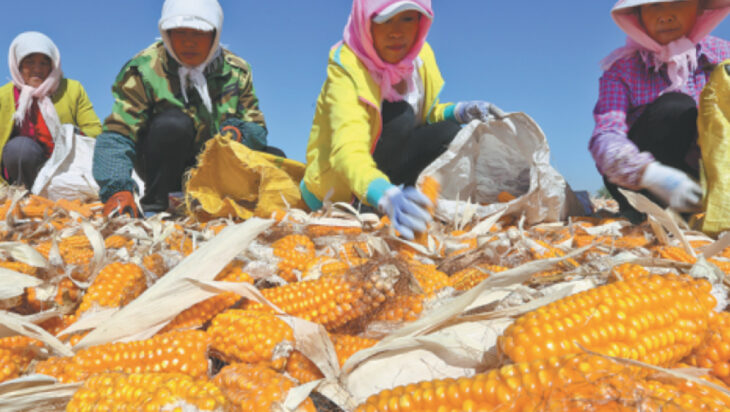 With China’s massive population, food security has always been a priority area for the government. hCGTN reporter Xia Ruixue has more from central China’s Henan Province.

There’s an old saying in China: “people won’t panic if they have grain in hand.”

Professor Ru Zhengang – a leading expert in hybrid wheat – understands that more than most. The 63-year-old has spent much of his career trying to ensure they have by developing high-yield varieties of wheat.

In 2002, he developed the “Aikang-58” – a species which has helped increase China’s wheat output by more than 30 billion kilograms since 2005. He says China’s greater yields is down to science.

RU ZHENGANG Professor, Henan Institute of Science and Technology “We’ve had good harvests in grain for more than 10 years. One reason is because we made scientific breakthroughs to develop new species of wheat to increase output.”

China has invested huge amounts of resources to ensure food security. Yet its yields of soybeans and corn are less than 60 percent of the United States and 13 percent of China’s vegetables are foreign varieties.

As demand in China increases, agricultural experts are being asked to develop more seed varieties to not just increase output, but also improve quality.

Tang Jihua has nearly 30 years’ experience in corn breeding research. His dream is to develop a variety that is disease resistance, has a high-yield and is suitable for mechanized operations.

TANG JIHUA Vice Principal, Henan Agriculture University “Corn didn’t originate in China. We have only 500 years history of eating corn. So we don’t have enough germplasm resources. That’s the biggest problem. Now we have leading conventional breeding technology in corn. More efforts should be placed now on molecular breeding technology.”

This September, the national crop seed bank began trial operations. It has 1.5 million copies in storage, which can be preserved for 50 years, a global leader. Meanwhile, the private and the public sectors are being asked to work together in seed production technology to drive innovation.

LIU GUANJUN Manager, Henan Wofeng Agricultural Development “It usually takes seven or eight years to cultivate a seed variety. In order to make it quicker, we go to Hainan to do the research. It’s warmer there. We hope to develop superior seed varieties as soon as possible.”

Seed production is so important to agriculture, it’s often been compared to semi-conductor chips in digital technology. China has world’s largest population. Experts say if it can achieve self-sufficiency and self-reliance in seeds, it can finally hold its own bowl in its own hands.